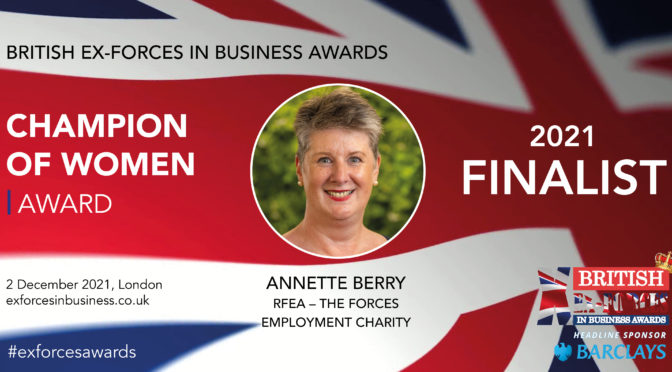 Former Army Nurse Annette Berry, originally from Glasgow and now based in West Somerset, has been shortlisted for the Champion of Women award at the prestigious British Ex-Forces in Business Awards, the world’s largest celebration of veterans in second careers. Annette is nominated in recognition of her work supporting ex-Military women find fulfilling civilian careers.

Annette spent 13 years serving in the Queen Alexandra’s Royal Army Nursing Corps before undertaking a career in recruitment and development roles across the public, commercial and third sectors. She now holds the role of Military Women Employment Advisor at RFEA – The Forces Employment Charity, offering support such as CV development, interview technique, career coaching and counselling to help ex-Servicewomen with their careers. Since undertaking her role in January 2020, Annette is proud to have helped over 200 ex-Servicewomen with their journey to securing meaningful employment.

Annette Berry says: “Having metaphorically walked in the boots and heels of my clients, I understand the issues facing military women who are returning to careers or changing direction and I support, enable and empower them in finding the perfect job. It is a complete surprise to have been nominated for this award and a real honour. After all, I’m just doing my job!”

Claire Gratton served for 22 years in the RAF and received Annette’s support in helping find secure employment. She says:

“Annette has helped me rediscover my worth again professionally. I felt at ease immediately and our first contact phone call lasted for over an hour. By the end of the call, I was in no doubt I had made the right choice by enquiring about the Military Women Programme.  Annette has the ability to connect with you in a way no pure civvy advisor ever could, part big sister, part friend, part comrade, she will help you see your value and give you the mentorship to realise your skill set. I thoroughly recommend RFEA to any ex-Servicewoman and hope this programme grows and continues to help out the female veteran.”

The Awards programme is a powerful vehicle for increasing visibility of both role models and career opportunities for service leavers. This year’s UK shortlist exhibits the second-career achievements of over 180 veterans and reservists, whittled down from a record-breaking 600 nominations. The sheer breadth of opportunities available to veterans are displayed through the large variety of sectors represented on the shortlist.

The winners of this year’s British Ex-Forces in Business Awards will be announced and celebrated at a glittering ceremony on 2 December, taking place in the InterContinental London – The O2. In attendance will be over 1,000 business and military leaders, expected to represent over 400 UK employers. Jacqui Oatley MBE will host the ceremony, as well as introducing a programme of live entertainment and special guest speakers including the double Olympic rowing champion Major Heather Stanning OBE.

“Having recruited over 600 veterans and supported thousands more through both our AFTER and VETS programmes, we are fully aware of how beneficial military-gained skills and values are and Barclays is a better business because of our veteran colleagues.

“These Awards play a crucial role in promoting the huge value that ex-forces personnel add in their second careers, both to their individual employers and to the economy as a whole. It is wonderful to see the veterans community come together in force and I have no doubt this outstanding talent pool will play a vital role in the UK’s economic rebound.”