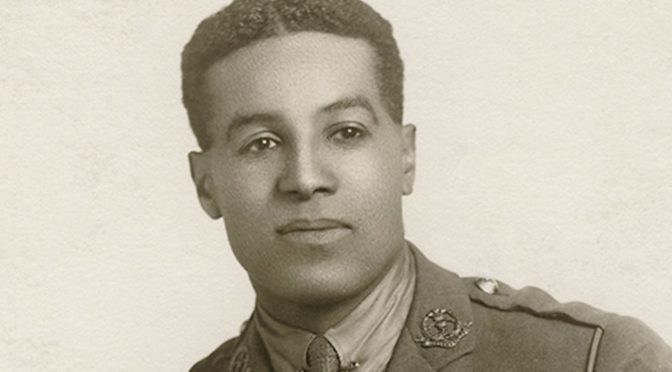 Walter Tull came from a mixed-race family. His mother, Alice, was a Folkestone local. His father, Daniel, a carpenter moved from Barbados to England. When Tull was seven, his mother died of cancer soon followed by his father’s death from heart disease and he was sent to an orphanage in Bethnal Green East London.

Walter became a professional footballer in 1908, and the following year signed for Tottenham Hotspur where he made his debut.  Unfortunately, despite his excellent form, he was dropped to the Reserves after only ten appearances and two goals,  due to the constant racist abuse he received from the terraces.  Sadly, Walter’s football career stalled, and he never reached his full potential and moved down divisions to Northampton Town.  It was commented at the time, “Tull remained professional and composed despite the intense provocation; He is Hotspur’s most brainy forward”

After the First World War Broke out in 1914, Tull enlisted into The Duke of Cambridge’s Own (Middlesex) Regiment, part of a ‘Footballers’ Battalion’ that drew professional players from a range of clubs, where he rose to the rank of Lance Sergeant.

He went on to fight in the Somme in 1916 and was eventually commissioned to 2nd Lieutenant in 1917, which was virtually unheard of at the time as the Manual of Military Law excluded soldiers who were not “natural born or naturalised British subjects of pure European descent” from becoming commissioned officers.

With the 23rd Battalion, Tull fought on the Italian Front from 30 November 1917 to early March 1918. He was praised for his “gallantry and coolness” having led 26 men on a night-raiding party, crossing the fast-flowing rapids of the freezing Piave River into enemy territory and returning them unharmed despite coming under heavy fire.

Tull and the 23rd Battalion returned to northern France on 8 March 1918.  On 25 March, Tull was shot and fatally wounded during a German offensive, It is reported Private Tom Billingham – a former goalkeeper for Leicester Fosse  attempted to drag Tull’s body back to the British position so he could be buried, but his efforts failed

In a letter of condolence to his family, the commanding officer of the 23rd Battalion, Major Poole, and his colleague 2Lt Pickard both said that Tull had been put forward for a Military Cross. Pickard wrote “he had been recommended for the Military Cross, and certainly earned it. However, the Ministry of Defence has no record of any recommendation but many records were lost in a 1940 fire.

It was later discovered that he had signed to play for Glasgow Rangers after the war. Rangers confirmed that Tull signed for them in February 1917 while an officer cadet in Scotland at Gailes, Ayrshire.

One of the first black players in the English game, the first British born black Army officer and the first black officer to lead a white unit into battle… Walter’s body was never recovered and remained in the soil of northern France like so many that bravely fought and died in the Great War