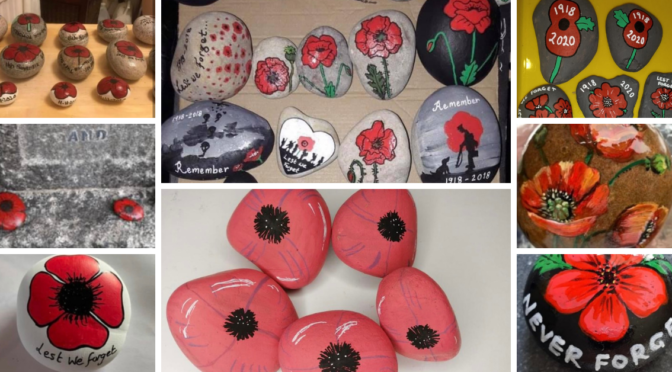 Project Nova, a national initiative to support veterans, is calling on ex-Forces and members of the public alike, to paint a poppy on a pebble and place it on a war memorial, or headstone of a veteran, to mark this year’s Remembrance Day.

The initiative is a continuation of an earlier activity Project Nova recommended to veterans who were experiencing social isolation during lockdown. They were encouraged to undertake research into identifying and visiting local war graves in their area, finding out information about the veteran who was buried there and surveying the condition of the grave which is then offered to the Commonwealth War Graves Commission.

The poppy pebble idea originated after clients of the project had asked how they could commemorate Remembrance Day, as many of the planned public activities had had to be dramatically scaled back owing to the coronavirus pandemic.

Project Nova is now asking all members of the public to show their support by finding a local war grave in their area as a location to place their painted poppy pebble, as a mark of recognition of the fallen.

“This simple idea has really caught people’s imagination and has been shared on social media over 15,000 times in a matter of a couple of weeks! I’ve since received queries and pictures from people getting involved from all over the world and we would love for even more people to get involved. It’s a wonderful way for people to find out more and feel connected to those who have been lost through conflict.”

Project Nova will host an online exhibition at a later date, featuring a selection of images of the painted poppy pebbles.

To get involved, or submit a painted poppy pebble image to Project Nova, email [email protected] or visit their Facebook group.

To donate to the Royal British Legion Poppy Appeal, visit: www.rbl.org.uk/poppyappeal and click on ‘donate’