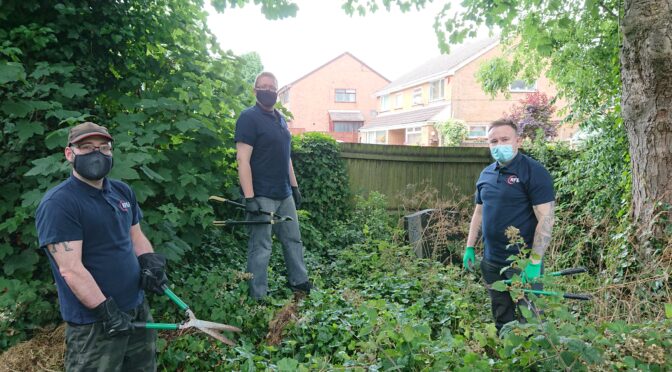 A team of workers from RFEA – The Forces Employment Charity has come together in their spare time to revive the grave of a former Prisoner of War.

The grave belongs to Albert Earnest Green, a decorated Army gunner who served in the Royal Artillery during the Second World War. He was a Far East Prisoner of War, captured in Java on 8th March 1942, and was finally liberated in Japan August 1945.

The veteran sadly passed away in 2006 and was buried in a West Midlands cemetery, which is shared with his father. Mr Green was described by his daughter as “a good man, kind and thoughtful, loved by his family and missed every day”.

The four-strong volunteer group, comprising of RFEA colleagues James Cole, Jack Rowan, Paul Schofield and Samantha Schofield, came together after Colin Back, National Manager of Project Nova, received word that the grave area had become overgrown and unwieldy, preventing the veteran’s daughter, Carol Rowe, from being able to pay her respects when she came to visit on Father’s Day, earlier this year.

After spending a hot, socially distanced, Saturday afternoon armed with masks, rakes, gloves and spades, the team managed to clear the area of large swathes of ivy, bindweed and other debris, before cleaning up the gravestone itself. This ensured the area was left clean and clear of the overgrowth that had previously prevented the family from getting near.

Carol Rowe, who met the team while they were in action, says: “I was completely overwhelmed by how clear it was and how wonderful it was to see my father’s grave again. The graves around it had also been cleared therefore making it easy and safe for me and my family to visit. I am very grateful for what they did for me and my father.”

Paul Schofield, Central Support Team Leader at RFEA, said: “It quickly became apparent how much Carol’s father and his history meant to her and her family, so I’m glad that the work we carried out will allow them to continue to pay their respects.”

Samantha Schofield, an Employment Advisor working on the Career Transition Partnership’s Future Horizons programme, added: “I feel that everyone should be able to access the graves of their loved one, especially when that loved one has served our country. I felt it was important to go along and help not only out of respect for his service, but so the family could continue to visit and remember the service and experiences of this man.  It felt really good seeing the massive transformation between before and afterwards and knowing the impact it will have on the family and their ability to pay their respects. It was enjoyable work and the team really worked together to get the best possible outcome for the family and to pay our respects to Albert himself.”

Jack Rowan, IT Development & Support Analyst at RFEA, commented: “It was really quite a small request in the scheme of things, yet one that would make a big difference to someone connected to the Armed Forces community that the RFEA has been offering support to for decades. I was proud to be able to do something to help and touched by the impact that we four volunteers had on the lady who had made the request. I also read about Albert and if you take a moment to pause and think about what he went through for us all, a couple of hours spent making his grave accessible to those who remember and want to honour him is really the least that any of us could do!”

Client Advisor James Cole, who previously served for two years in the Royal Navy before transferring to the Marines, concluded: “I decided to volunteer because Albert sacrificed so much when he served and I wanted to show my respect. I was extremely pleased with our work and now Albert’s daughter can visit the grave with her children.”