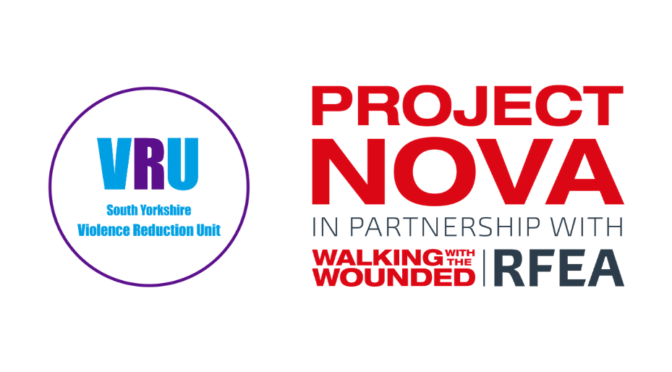 RFEA – The Forces Employment Charity, has received a significant funding boost of over £16,000 from South Yorkshire Violence Reduction Fund, to support its successful Project Nova scheme.

Project Nova, delivered in partnership between RFEA and Walking With The Wounded, supports veterans who have been arrested and enter Police Custody.  It also supports veterans who are referred by specialist Police teams, or other statutory organisations, because they are at risk of arrest. The scheme was launched in 2014 and currently operates across South Yorkshire and Humberside, the North East, North West and East of England.

Thanks to the welcomed support from South Yorkshire Violence Reduction Fund, the successful Project Nova scheme will be extended to focus on reaching veterans even earlier, acting as an intervention service for those at risk of arrest. Project Nova co-ordinators will receive referrals from South Yorkshire Police and work closely with Police Street teams to engage with homeless veterans, as well as raising awareness through other organisations such as Local Authorities; Drug and Alcohol Charities; Mental Health Charities and Police Teams working in the Community.

South Yorkshire has a large ex-military population, with an estimated 239,000 veterans living in the area,[1] some of whom may be vulnerable, socially isolated or need additional support to live a law-abiding life. Project Nova currently receives around 250 referrals across the region each year, helping veterans to regain and improve social stability in order to find employment and steer them away from re-offending and/or risk of offending.

Upon receiving a referral, Project Nova co-ordinators undertake a needs assessment to establish what support is required by the individual, followed by practical support offered through a network of local charities. Project Nova co-ordinators understand the experiences of ex-servicemen and women both during and after their military careers – empathy which gives veterans the strength they need to make changes to their lives and access support through health and specialist services.

“While most veterans make a successful transition into civilian employment, there are a number who find themselves faced with challenges after leaving the military, such as housing, debt, substance and alcohol misuse, through to health issues such as PTSD, which, without the right support, can spiral towards offending and the risk of offending.

“Our experience is that veterans often are not inclined to engage with mainstream support, as they do not feel that their life experience is well understood. With the support of the South Yorkshire Violence Reduction Fund, we will improve the lives of veterans by preventing them from reaching the point of arrest through tackling the social issues at the root cause of social unrest, which will, in turn, improve the lives of communities across South Yorkshire by reducing veteran offending in the area.”

Fergus Williams, Director of Operations at Walking With The Wounded says:

Rachel Staniforth, Joint Head of the South Yorkshire Violence reduction Unit, adds: “We have been impressed with the impact Project Nova has had and are delighted to be able to offer further support to veterans and our wider community.”