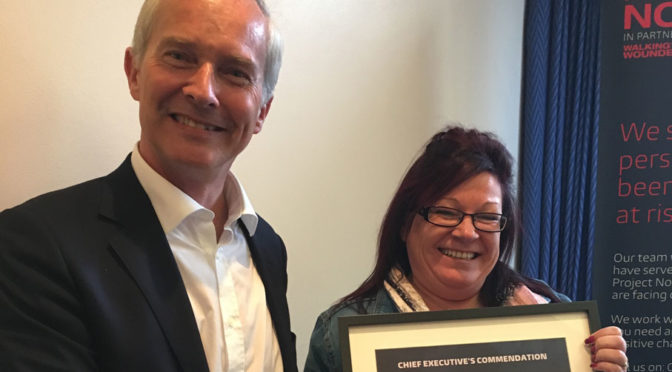 This second-ever Commendation was awarded in honour of Teresa’s hard work and dedication to helping her clients, not least the family she helped over Christmas last year.

Visiting a client in the days before Christmas, Teresa discovered that the family had no tree, no presents for the two children, and very little money to see them through to January. So she went to work, putting the call out on Twitter and via the Hull Daily Mail. Within days, the gifts were piling up and food was being donated via the Hull Veterans’ Centre.

After a frenzied weekend of gift collecting, shopping and wrapping, Mrs Santa arrived at the family home on Christmas Eve in a Humberside Police riot van, as all the gifts wouldn’t fit into Teresa’s little hatchback.

On being awarded the Commendation, Teresa said: “This was so unexpected. It’s amazing to be given this award, and I’m so lucky to work with such an amazing team, all of whom deserve this award as much as I do.”